On 28 September, Rembrandtin Lack GmbH & Nfg. KG was honoured by CEFIC, the European Chemical Industry Council, for its special commitment to Corporate Social Responsibility with the European Responsible Care Award, which was presented on the occasion of the CEFIC General Assembly in London. Rembrandtin Lack is the first Austrian company to receive this award. 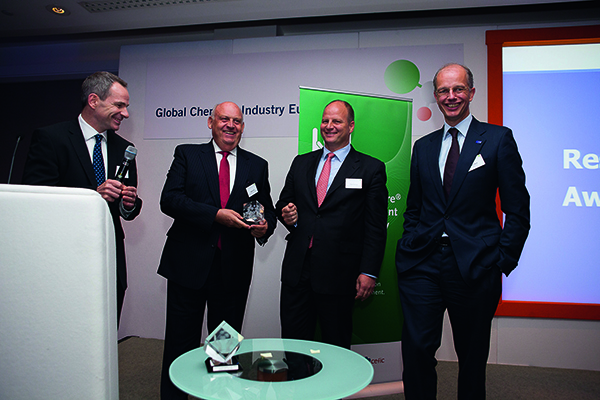 Rembrandtin Lack is one of today’s leading producers of specialty coatings for industrial applications – not only in Europe. The products of the Viennese coatings manufacturer are used all over the world: In the magnetic levitation train in Shanghai, for example, a special coating of Rembrandtin Lack enhances the effectiveness of the electromagnetic components. Rembrandtin Lack protective coatings protect the Vienna Ferris Wheel as well as bridges all over Europe from corrosion. This success is based on intensive research and development, focussing mainly on sustainability and the protection of the environment, to which about one out of four employees is committed every day. Due to this commitment and a number of additional innovative measures in the area of Corporate Social Responsibility (CSR) going far beyond legal requirements, Rembrandtin Lack plays a pioneering role in the branch and received numerous awards and prizes.

On 28 September, Rembrandtin Lack was honoured with the European Responsible Care Award for its special achievements in the area of health, safety and the environment. In total, more than 50 companies from 13 countries took part in the competition, but only three received an award. Rembrandtin Lack is among these, and, furthermore, the first Austrian company receiving this honour. Hubert Culik, Managing Director of Rembrandtin Lack GmbH Nfg. KG, and Ralph Martens, chairman of the supervisory board of Ring International Holding AG, accepted the award in the category “Small and medium-sized companies” from the chairman of the World Chemical Association ICCA, Peter Cartwright, in the presence of EU Commissioner Janez Potočnik.

Rembrandtin Lack convinced the jury with its comprehensive Corporate Social Responsibility project consisting of numerous activities to motivate employees, promote the sustainable development of the company and contribute to society. At the awards ceremony, Mr. Culik said, “When Rembrandtin Lack received the Responsible Care certification in 1994, we looked for ways in which an SME could show a responsibility to care that goes beyond the necessary minimum of legal requirements. This inspired the launch our CSR project. To have our efforts recognized in this way, is a wonderful accomplishment that motivates us to further expand our CSR Project”.

2014: RIH is majority shareholder of the coatings giant Helios
Scroll to top